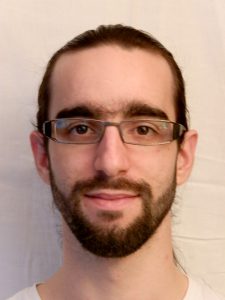 Currently temporary teaching and research assistant at ISTIC for the 2017-2018 academic year.

I entered the department of Electronics, Electrotechnics and Control at the Ecole Normale Supérieur de Cachan in 2010.
I graduated a Master of Education and Teaching, electrical engineering option in 2013. The same year I passed the competitive french exam of the Agregation of Engineering Sciences, Electrical Engineering option. In 2014, I graduated a Master degree in Control and Signal and Image Processing at ENS Cachan, Supélec and University Paris-Sud. I made my Master research project in the Lagadic team on the tracking of deformable objects in ultrasound volumes.

I received a Ph.D. in Signal Processing and Telecommunications at the University of Rennes 1 in 2017. My Ph.D. work was on the subject of flexible needle steering using ultrasound visual servoing and was carried out under the supervision of Alexandre Krupa and Marie Babel. Early 2017, I also spent three months of mobility at University of Twente in the Netherlands, where I worked on needle steering at Surgical Robotics Laboratory in the research team of Sarthak Misra.

The focus of my research is related to the development of a solution for the assistance to the needle insertion procedures. These procedures are more and more commonly used, mainly for diagnosis and treatment of tumors. The steering of a thin flexible needle in soft tissues is a complex task which requires a high accuracy to avoid misdiagnosis or damages to surrounding healthy tissues. I mainly focus on the design of a control strategy in order to reach a target in the tissues with a flexible needle attached to a robotic arm. Visual feedback is obtained through a 3D mechanical ultrasound probe to be able to localize the needle and the target during the procedure. Hence my work also focuses on the modeling of the needle-tissue interaction and on image processing for the tracking of the needle in ultrasound volumes.