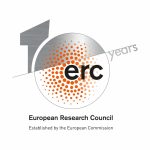 Vision and Hearing In Action 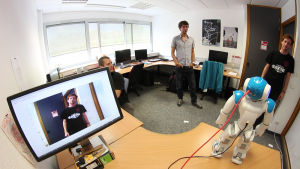 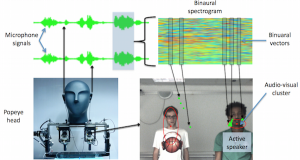 May 2017, ERC PoC grant: The PI and his team were awarded an ERC Proof of Concept grant for the project VHIALab submitted in January 2017.

January 2017: R. Horaud was invited to join the editorial board of the IEEE Robotics and Automation Letters as an associate editor.

The objective of VHIA is to elaborate a holistic computational paradigm of perception and of perception-action loops. We propose to develop a completely novel twofold approach: (i) learn from mappings between auditory/visual inputs and structured outputs, and from sensorimotor contingencies, and (ii) execute perception-action interaction cycles in the real world with a humanoid robot. VHIA will launch and achieve a unique fine coupling between methodological findings and proof-of-concept implementations using the consumer humanoid NAO manufactured in Europe. The proposed multimodal approach is in strong contrast with current computational paradigms that are based on unimodal biological theories. These theories have hypothesized a modular view of perception, postulating that there are quasi-independent and parallel perceptual pathways in the brain. VHIA takes a radically different view than today’s audiovisual fusion models that rely on clean-speech signals and on accurate frontal-images of faces; These models assume that  videos and sounds are recorded with hand-held or head-mounted sensors, and hence there is a human in the loop whose intentions inherently supervise both perception and interaction. Our approach deeply contradicts the belief that complex and expensive humanoids (often manufactured in Japan) are required to implement research ideas. VHIA’s methodological program addresses extremely difficult issues, such as how to build a joint audiovisual space from heterogeneous, noisy,  ambiguous and physically different visual and auditory stimuli,  how to properly model seamless interaction based on perception and action, how to deal with high-dimensional input data, and how to achieve robust and efficient human-humanoid communication tasks through a well-thought tradeoff between offline training and online execution. VHIA bets on the high-risk idea that in the next decades robot technology will have a considerable social and economical impact and that there will be millions of humanoids, in our homes, schools and offices, which will  be able to naturally communicate with us.

Perception team (current and past) members involved in VHIA

All our articles are available for download on HAL (open archive)