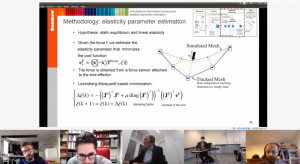 Romain Lagneau will defend is PhD on December the 4th 2020 at10:00AM.
This presentation is entitled “Shape control of deformable objects by adaptive visual servoing“.
Abstract:

Nowadays, robots are able to manipulate rigid objects at a high rate and with an accuracy greater than human operators. However, when it comes to non-rigid objects, dexterous robotic manipulations become much difficult due to the deformations that occur when forces are applied. Improving the manipulation of such objects is crucial for applications such as food manufacturing or surgery. Among the scientific challenges arising from the robotic manipulation of deformable objects, we chose to focus our work on controlling their shape and estimating their physical properties.

First, we propose a novel deformation servoing method allowing to control the shape of an object while not requiring any knowledge on its physical properties. We estimate online the deformation Jacobian matrix that relates the motions of the end-effector(s) to the resulting deformations. Using this matrix, it is possible to compute the velocity control law that permits to generate a desired deformation. To evaluate the accuracy and stability of the method, we also propose both a marker-based and a marker-less evaluations.

By improving robotic manipulation of deformable objects, these contributions pave the way for the development of robots able to automatically adapt their behavior with unknown deformable environments, allowing them to replace human operators in harmful environments.