On November 26, 2019, the French Academy of Sciences awarded the Michel Monpetit award to Paolo Robuffo Giordano, Director of Research at the CNRS at IRISA, in recognition of his entire career.

This prize is in recognition of his work on control systems theory, and in particular passive control, in several fields of robotics (mobile robots, manipulators, air robots, remote operations). 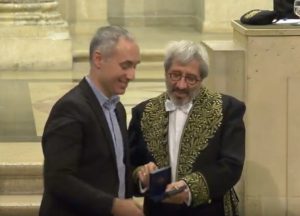