KORP-PL is a novel sidechain-free coarse-grained knowledge-based scoring function for protein-ligand interactions developed together with Pablo Chacón from IQFR Madrid. 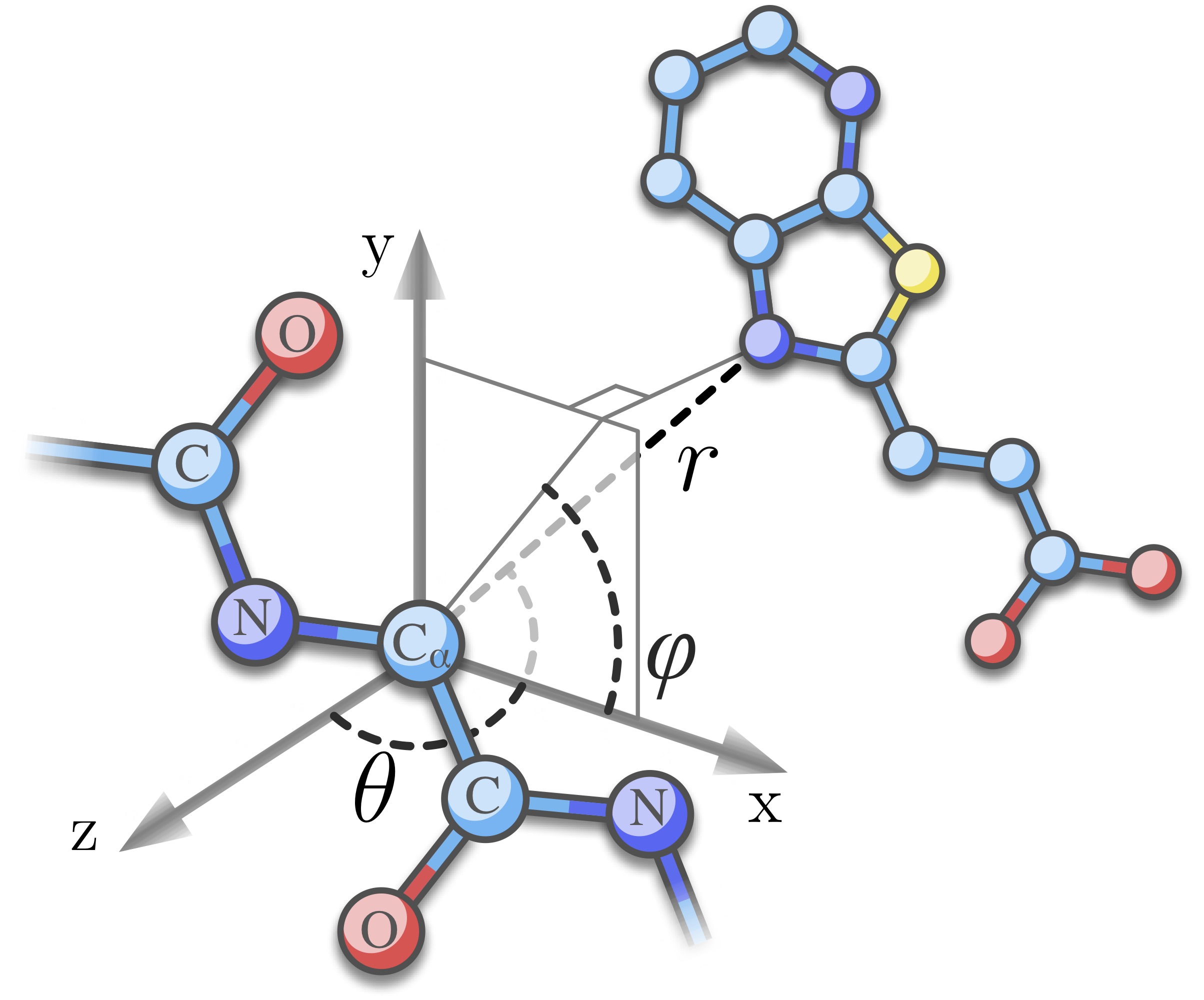 Schematic view of relative orientation of a ligand molecule to a protein residue. The residue is represented with a 3D oriented frame built from three backbone atoms. The relative orientation of a ligand atom is described by two spherical angles, θ, the polar angle between the r and z vectors, and φ, the azimuthal angle between x and the projection of r into the xy plane.

We collect sidechain-free statistics of the distances and angles between an oriented frame built on a residue backbone and a ligand atom for each residue and ligand atom within a cutoff distance. The interaction potentials are then derived in a classical way[1]. The concept of defining local coordinate frames for each of the protein residues was previously used for protein and loop modeling in the 6D orientation-dependent knowledge-based potential KORP[2]. KORP-PL was trained on PDBBind 2016[3] with ligand atom typization similar to the one from Convex-PL[4].

We obtained top-ranked results in docking and screening tests. However, our performance in  affinity prediction exercises was below the average.

We obtained top-ranked results in docking and screening tests. In the screening test evaluated by the enrichment factor metric we outperformed other scoring functions more than 1.5 times. However, our performance in  affinity prediction exercises of this benchmark is rather poor.

We compiled a benchmark from the D3R Grand Challenges 2[7], 3[8], and 4[9] user submissions and native structures. It contains pose prediction and scoring exercises. The aim of the pose prediction test is to find a near-native pose among user submissions from each of the Challenges (i.e. it does not require manual docking). Scoring test measures the correlation between predicted binding affinities and experimental constants of co-crystal complexes from the Challenges.

KORP-PL showed very good results in all the three D3R pose prediction tests. Among them, it perfectly performed in the test derived from the Grand Challenge 3, which was a tough case for all the non-template-based docking protocols during the challenge timeframe owing to the wide binding pocket hydrophobicity and high chemical diversity of ligands. As for affinity predictions, KORP-PL obtained very nice results for the Grand Challenge 2 and 4 targets, but a near-zero correlation for the Grand Challenge 3.