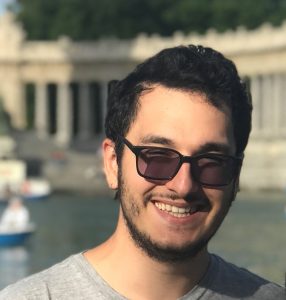 I started my undergrad in Computer Engineering in 2013, at Pontifical Catholic University of Rio Grande do Sul (PUCRS), in my hometown of Porto Alegre, in southern Brazil. During this time, I was part of a government-funded 1 year exchange program in the US called Science Without Borders and spent two semesters studying at Mercer University as part of my undergrad, while also completing a summer internship in California, at UC, Berkeley. I was involved in research since 2013 and was a permanent member of the Virtual Reality Group at PUCRS, working with image processing and virtual reality projects, while also publishing some papers. I left the group in January 2019 after getting my engineering degree.

In September 2020 I moved to Rennes, France, to start a PhD at Inria. My thesis is within the CLIPE project and is directed towards enhancing the reactivity and responsiveness of virtual agents. It is being supervised by Julien Pettré, Ludovic Hoyet, Marc Christie and Carol O’Sullivan.

On a personal note, I love playing videogames and watching Formula 1. I usually play racing simulators, such as Gran Turismo, and all sorts of RPGs. As for F1, I’m a big fan of McLaren and my favorite drivers are Lando Norris, George Russel and Daniel Ricciardo! I’m an Italian-Brazilian citizen, but I’ve lived most of my life in Brazil. I speak Portuguese, English, Spanish and I’m learning French!