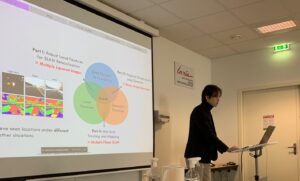 The SLAM (Simultaneous Localization And Mapping) technique concentrates on localizing and recovering the environment in a simultaneous way and is one of the core functionalities of many industrial products such as augmented reality, autonomous driving, and even modern filmmaking workflow.

Multiple difficulties in different levels can influence the final performance of robot agents’ SLAM task, as the pipeline is long and complicated. Many solutions are proposed for reinforcing the SLAM system from different angles respectively, with the means from classic statistical probability models to the modern data-driven deep neural networks. However, the quest of improving the robot’s robustness under dynamic and complicated environments persists and becomes more and more significant and active for nowadays robotics research. The need for improving the robustness of robot agents is imminent and regarded as one of most imperative factors for deploying robots ubiquitously in our daily life.

Under this context, this thesis tries to address the problem of SLAM robustness, in a very systematic view: we try to break down the SLAM system into different and inter-influential modules for answering possible questions within each module and wishing to help improve the overall robustness of SLAM systems under complicated conditions.

With the above objectives, the contributions of the thesis are stated from multiple angles: 1) From the image feature angle, we proposed a multiple layered image structure for improving the performance of traditional local image features under extreme conditions. Furthermore, an optimisation method on linear searching and mutual information assisted convex optimisation are designated for tuning the optimal parameters with the proposed structure; 2) From the geometric primitive angle, we proposed a relative pose estimation and SLAM framework under the multiple planar assumption, by keypoint feature-based and template tracker based methods, respectively. We tried to achieve better performance on mapping and tracking simultaneously with the help of a more general planar assumption. 3) From the angle of relocalization of the SLAM system, we proposed a binary graph structure for embedding spatial information and heterogeneous data formats such as depth image, semantic information etc. The proposed method enables robotics SLAM systems to relocalise themselves with a higher success rate even under different lighting, weather and seasonal conditions.