We address the problem of localization of single and multiple speech sources in reverberant and noisy rooms.  The interchannel response (two microphones) corresponding to the direct-path propagation of an audio source is a function of the source direction. In practice, this response is contaminated by noise and reverberation. The direct-path relative transfer function (DP-RTF) is defined as the ratio between the direct-path acoustic transfer function of the two channels. We proposed several  methods to estimate the DP-RTF from the noisy and reverberant microphone signals in the short-time Fourier transform domain. First, the convolutive transfer function approximation is adopted to accurately represent the impulse response of the sensors in the STFT domain. Second, the DP-RTF is estimated by using the auto- and cross-power spectral densities at each frequency and over multiple frames. In the presence of stationary noise, an inter-frame spectral subtraction algorithm is proposed, which enables to achieve the estimation of noise-free auto- and cross-power spectral densities. Third, a consistency test is proposed to check whether a set of consecutive frames is associated to the same source or not.  Finally, a complex-valued  Gaussian mixture model (CGMM) is adopted to assign the DP-RTF observations to the speaker locations,  whose components correspond to all the possible candidate source locations. After optimizing the CGMM-based objective function, both the number of sources and their locations are estimated by selecting the CGMM components with the largest weights. In addition, an entropy-based penalty term is added to the likelihood to impose sparsity over the set of CGMM component weights. This favors a small number of detected speakers with respect to the large number of initial candidate source locations.

An example for online multiple-speaker localization: top The CGMM weights along time. bottom The black circles represent the detected speakers by selecting the peaks of CGMM weights. The gray curves represent the ground-truth trajectories of active speakers. 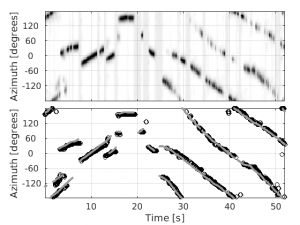