ACM SAP’18: Virtual Shadows for Real Humans in a CAVE 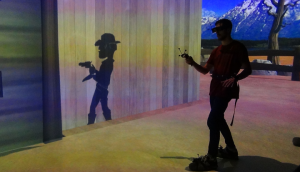 In immersive projection systems (IPS), the presence of the user’s real body limits the possibility to elicit a virtual body ownership illusion. But, is it still possible to embody someone else in an IPS even though the users are aware of their real body? In order to study this question, we propose to consider using a virtual shadow in the IPS, which can be similar or different from the real user’s morphology. We have conducted an experiment (N=27) to study the users’ sense of embodiment whenever a virtual shadow was or was not present. Participants had to perform a 3D positioning task in which accuracy was the main requirement. The results showed that users widely accepted their virtual shadow (agency and ownership) and felt more comfortable when interacting with it (compare to no virtual shadow). Yet, due to the awareness of their real body, the users have less acceptance of the virtual shadow whenever the shadow gender differs from their own. Furthermore, the results showed that virtual shadows increase the users’ spatial perception of the virtual environment by decreasing the inter-penetrations between the user and the virtual objects. Taken together, our results promote the use of dynamic and realistic virtual shadows in IPS and pave the way for further studies on “virtual shadow ownership” illusion.