The paper addresses the problem of detecting and localizing audio-visual events (such as people) in a complex/cluttered scenario such as a cocktail party. This paper is addressing one of the core problems associated with robust interactions between a robot and a group of people.

The paper can be downloaded here: Finding Audio-Visual Events in Informal Social Gatherings 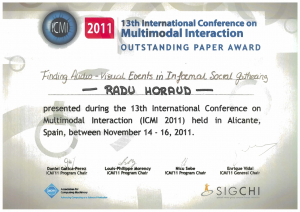