We release the AVTRACK-1 dataset: audio-visual recordings used in the paper [1].

This dataset can only be used for scientific purposes.

The dataset is fully annotated with the image locations of the active speakers and the other people present in the video. The annotated locations correspond to bounding boxes. Each person is given a unique anonymous identity under the form of a digit (1, 2, 3, …) and this identity is consistent through the entire video. The annotation is done in a semi-automatic fashion, i.e., a human annotated the bounding boxes on a small video segment, and a tracker [2] is used to interpolate the bounding boxes in the remaining frames. Tracking drifts and failures were manually corrected. The active speaker is manually annotated by selecting which person is speaking at each video frame. The dataset also contains sound source locations and upper-body detections as used in our paper [1].

This release contains four audio-visual sequences. The description of the sequences follow:

If you use the dataset for a publication, please cite our ICCVW AVS Paper [1] 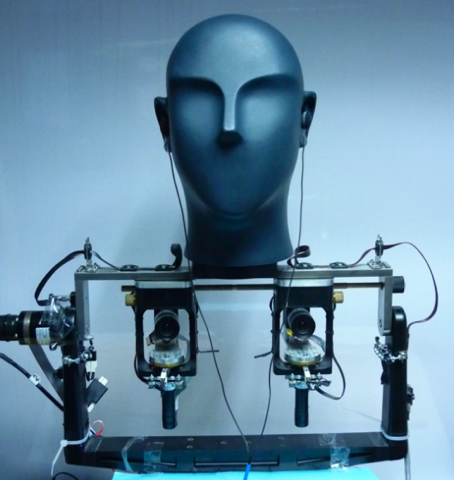 The recording is done with a dummy head equipped with 4 microphones and two cameras. The video from one of the camera is available in this dataset release. The video is recorded at 25 FPS. The Audio is sampled at 44.1Khz.

A great effort is put to make the audio and video synchronized. You can assume the audio start on the first video frame.

The annotation file format is a CSV text-file containing one object instance per line. Each line contain 10 values:

: is the video frame index. Video frame always start from 0.

: is the object id. A unique number is assigned to a particular person appearing through out the video in the ground truth files.

,,, : represents the bounding box region (rectangle) on the video frame.

: is a value contains the detection confidence. This is useful only in the detection files. A value of -999 means that this particular instance is not a useful entry and can be ignored in the other files.

,, : can be ignored and are only here for a future usage. We will provide the 3D position of the object in the future release of the dataset.

The folder structure for each recording is as follows:

A demo MATLAB script to visualize the annotation is provided with the dataset.

We used this dataset for speaker diarization task in [1] [5]. Previously, the recording were extensively used in speaker localization [6], [7].

If you would like to be cited here just drop me a note.