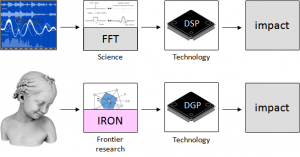 Short Summary: The purpose of this project is to bring forth the full scientific and technological potential of Digital Geometry Processing by consolidating its most foundational aspects. Our methodology will draw from and bridge the two main communities (computer graphics and computational geometry) involved in discrete geometry to derive algorithmic and theoretical contributions that provide both robustness to noisy, unprocessed inputs, and strong guarantees on the outputs. The intended impact is to make the digital geometry pipeline as generic and ironclad as its Digital Signal Processing counterpart.

Scientific Context
Digital geometry processing (DGP) is a now a core scientific field seeking to develop automated methods in order to deal with the ever-increasing variety and abundance of geometric data. The grand challenge for DGP is to elaborate the theoretical and algorithmic foundations for the acquisition, manipulation, transmission and manufacturing of complex 3D objects.
A major driving force in the field in recent years has been to elaborate mathematical and algorithmic foundations for analyzing and processing complex shapes, the analogue of analyzing and filtering signals in digital signal processing (DSP). The main results are discrete equivalents of basic notions and methods of differential geometry, such as curvature and shape fairing of polyhedral surfaces. Another major drive, of central importance in this proposal, has been to create methods for geometry reconstruction and approximation, the analogue of measuring and converting signals in DSP. The challenge is considerably more difficult than for ordinary signals due to the variety of geometric data. Among the many approaches proposed, the ones which are theoretically-founded are able to prove correctness of their reconstructions and approximations with respect to the geometry and topology of the inferred or input shapes. Furthermore, reliable implementations of these methods have been made possible through the introduction of new paradigms for reliable geometric computing. For computational geometers correctness and reliability are considered the two foremost issues, but the methods proposed thus far typically assume ideal, computer-synthesized data. These assumptions on input data (such as regular, isotropic, or noise-free sampling) clash with the practical reality in which datasets acquired from the physical world are imperfect and irregularly spaced.
Geometric data are increasingly acquired through measurements from scanners, satellites, ultrasound, etc. These sources of data are reputedly unfit for direct processing: they are typically ridden with noise, non-uniform sampling, and even outliers. In addition, geometric datasets are increasingly obtained from a variety of acquisition systems, making them heterogeneous as well. Moreover, current processing tools throughout the geometry pipeline can make the data worse as they involve conversions and alterations that commonly induce foldovers and self-intersections for surfaces, badly-shaped elements and erroneous topology for volumes, etc.

Dire Needs
While existing DGP algorithms have been successfully demonstrated on select datasets, their lack of industrial-strength robustness to imperfect and heterogeneous geometric datasets severely impairs their use in industrial applications. For this very reason we have seen in recent years some work devoted to the repair of defect-laden data and a number of preliminary approaches to deal with imperfect datasets. The initial grand promise of DGP as a successful extension to DSP (i.e., as robust and general as DSP) for the very special “signals” that shapes are has not been realized yet. The tenet of this proposal is that the potential of geometry processing techniques is far from being reached, and that to realize its full potential, one must tenaciously address the most enduring and fundamental problems hampering resilience to imperfect and heterogeneous input:
• Need for robustness. The vast majority of geometry processing methods only function for idealized, defect-free input data such as point sets without outliers, or intersection–free 2–manifold (surface) triangle meshes—not raw polygon soups. For instance, although many surface reconstruction algorithms from point sets are fairly robust to noise, considerably fewer techniques are simultaneously robust to highly non-uniform sampling, noise and outliers. Similarly, almost none of the mesh processing algorithms of the “standard geometry processing toolbox” are robust to polygon soups. Robustness to defect-laden inputs is a largely unaddressed scientific challenge, and we argue that there is a need for a unified theory and algorithms capable of dealing with these data hampered with a variety of imperfections.
• Need for genericity. Nearly all current geometry processing methods are specialized to point sets, triangle meshes, or contours, but cannot handle mixed inputs. When we need to deal with heterogeneous data or with new data types, the current solution consists of converting them to a common representation or to devise yet another specialized method. As each conversion adds some geometric inaccuracy and possibly some defects as well, this solution can be even more damaging when used as an input to non-robust algorithms. Instead of requesting the practitioner to systematically convert everything, there is a need for a unified way of dealing with heterogeneous data.
• Need for guarantees. The majority of geometry processing algorithms do not provide guarantees for their outputs, most likely because many target applications in computer graphics care about visual impact more than practical guarantees. Computational geometers, however, have considered guarantees a priority. Alas, the theoretical assumptions on the input data are often not met in practical applications. For example, the provably correct Delaunay-based surface reconstruction algorithms assume an epsilon sampling (i.e., dense and isotropic). Other algorithms provide guarantees without unattainable assumptions, but do not fully address the problem. One concrete example is a recent mesh refinement algorithm which guarantees intersection-free and geometric error tolerances, but generates isotropic meshes that are unnecessarily large.
• Need for automation. The lack of robustness, genericity, and guarantees we mentioned above conspire to make the task of streamlining the whole processing pipeline almost impossible: while each algorithm along the pipeline is presented as a fully automatic process in academic papers, their requirements for inputs and lacks of guarantees on outputs prevent these building blocks from working together seamlessly. For instance, an aircraft manufacturer who needs to perform computational fluid dynamics simulation on the CAD model of a helicopter will have to first convert the model into a surface mesh that is watertight and intersection-free. This seemingly simple process currently takes weeks for an experienced engineer, as repair and defeaturing of the converted mesh requires trial and error. However, the final simulation takes only one hour of parallel computation on a cluster of 2K computers. As this procedure must be repeated for each major editing of the CAD model, and as it is the wall clock time of a process that matters in such industrial applications, it is of crucial important to reduce, through automation, the conversion duration from weeks to hours.