The Biovision Lab is seeking to recruit a highly-qualified Ph.D. candidate to join our dynamic, multi-disciplinary research team, whose primary goal is to study vision impairment from theoretical and applied perspectives. You will be based in Sophia-Antipolis on the French Riviera, in the Inria Research center.

CONTEXT: Understanding how the visual system encodes visual information is crucial for, at least, two reasons: mimic object recognition in computer vision, and optimally restore vision in blind patients. Bio-inspired artificial networks (e.g., deep nets) perform object recognition with high-level performance but remain sensitive to changes in the context. In contrast, our visual system efficiently adapts over time to novel stimuli and is able to efficiently detect fast changes in a visual scene, with very low energy consumption. Part of this processing is done in the retina, which responds to unexpected changes in a visual scene: detection of a moving object on a moving background, the omission of a flash in a sequence of periodic flashes, change of direction of a moving object. Our project introduces a new hypothesis, explored from the point of view of biology and computational modelling : the retina is able to detect “surprise” in a visual scene, i.e., deviations from the expectation made on the basis of a prior rapidly changing in time (the visual context). We hypothesize that this ability is due to short term plasticity at specific synapses of a fundamental retinal circuit, widespread all over the retina.

Which computations are enabled by dynamical synapses in such a network? This is the issue tackled in this project, with the perspectives of better understanding the retina machinery and visual processing, and proposing new computational paradigms that could be used in computer vision and retinal prostheses.

PROJECT: The Ph.D. will be done under the supervision of Bruno Cessac (INRIA Biovision team [1]) in close collaboration with Olivier Marre (Institut de la Vision [2]) at the interface between computational neuroscience and biology. In a first step, we will develop a model of the dynamical synapses involved in the ON-OFF retinal pathways. Our model will be derived from data acquired at Institut de la Vision thanks to a novel experimental tool allowing to stimulate single retinal cells in the retinal network, with any temporal pattern, while recording the response of ganglion cells (the cells sending the visual information to the brain via the optic nerve) [3]. In a second step, we will study how short term synaptic adaptation, combined with the laterally connected retinal network (via amacrine cells), enables the retina to detect deviations from the anticipation constructed from the short-term history of the visual scene. This study will rely on large scale simulations of the retina with the MACULAR retina simulator developed by the INRIA Biovision team [4] (Figure. 1). These simulations will be confronted with experiments. 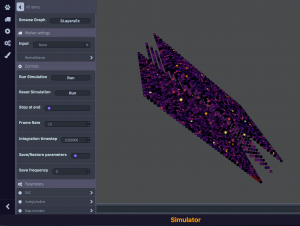 EXPECTED IMPACT.  Behind a better understanding on how retina is able to efficiently detect fast changes in its visual environment, this project will lead to potentially new paradigms in two fields :

(i) Improve vision restoration in blind patients equipped with retinal prostheses. A central challenge for retinal implants is to optimize information sent to the brain so that patients can make the best use of it. Unveiling how the retina responds to surprise in a fast way with very low energy consumption would provide a way to design algorithms for prostheses, allowing e.g. to alert a patient in the case of a danger coming from a moving object. Most therapies aiming at restoring vision for blind patients rely on stimulating ganglion cells. However, this means bypassing all the computations performed by the normal retina with a serious impact on the perceptual performance of the blind patient. To overcome this issue, one strategy would be to emulate the computations performed by the retina when performing the stimulation of ganglion cells. Our project could be very useful to design a proper strategy for this purpose.

(ii) Mimic object recognition in computer vision with neuromimetic circuits affording new types of computations. Neuromimetic networks are based either on firing rates neurons or spiking neurons. In the retina, most neurons do not spike (except the ganglion cells).  Thus, synaptic adaptation relies more on graded, continuous variations of the voltages, thereby involving continuous-based computations with low energy consumption. This could allow proposing new architectures for dynamic vision sensors and computer vision.

EXPECTED PROFILE:  We search for a student with a strong background in biology and computational neuroscience modelling.