David Bommes: Applied Optimization (not only) for Geometry Processing

Recent advances based on entropic regularization are unleashing the power of optimal transport. In this talk I will present a novel approach for computing a homeomorphic map between two discrete surfaces. While most previous approaches compose maps over intermediate domains which result in suboptimal inter-surface mapping, we directly optimize a map by computing a mass transport plan between two surfaces. This non-linear problem, which amounts to minimizing the Dirichlet energy of both the map and its inverse, is solved using two alternating convex optimization problems in a coarse-to-fine fashion. Computational efficiency is further improved through the use of Sinkhorn iterations, modified to handle minimal regularization and unbalanced transport plans. The resulting inter-surface mapping algorithm applies to arbitrary shapes, with little to no user interaction. 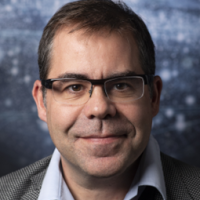