We’re hiring a developer for the support of Nilearn. The position will be with Parietal, and in close collaboration with the EBRAINS European platform.

Valentin Iovene will defend his PhD thesis in the Gilles Kahn room of Inria Saclay’s Alan Turing building, at 3PM on November 23rd. 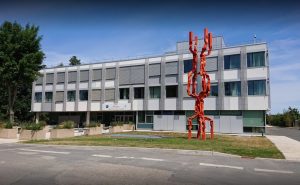 The thesis is entitled

This work was done under the supervision of Dr. Demian Wassermann within the Parietal team.

Members of the jury

Abstract of the thesis

This thesis contributes to the development of a probabilistic logic programming language specific to the domain of cognitive neuroscience, coined NeuroLang, and presents some of its applications to the meta-analysis of the functional brain mapping literature. By relying on logic formalisms such as datalog, and their probabilistic extensions, we show how NeuroLang makes it possible to combine uncertain and heterogeneous data to formulate rich meta-analytic hypotheses. We encode the Neurosynth database into a NeuroLang program and formulate probabilistic logic queries resulting in term-association brain maps and coactivation brain maps similar to those obtained with existing tools, and highlighting existing brain networks. We prove the correctness of our model by using the joint probability distribution defined by the Bayesian network translation of probabilistic logic programs, showing that queries lead to the same estimations as Neurosynth. Then, we show that modeling term-to-study associations probabilistically based on term frequency-document inverse frequency (TF-IDF) measures results in better accuracy on simulated data, and a better consistency on real data, for two-term conjunctive queries on smaller sample sizes. Finally, we use NeuroLang to formulate and test concrete functional brain mapping hypotheses, reproducing past results. By solving segregation logic queries combining the Neurosynth database, topic models, and the data-driven functional atlas DiFuMo, we find supporting evidence of the existence of an heterogeneous organisation of the frontoparietal control network (FPCN), and find supporting evidence that the subregion of the fusiform gyrus called visual word form area (VWFA) is recruited within attentional tasks, on top of language-related cognitive tasks.

Hicham will defend his PhD thesis on March 23rd  at 10 am, online.
Title:  Advances in Optimal transport and applications to Neuroscience
Abstract:
Brain imaging devices can provide a glimpse at neural activity in multiple spatial locations and time points. Moreover, neuroimaging studies are usually conducted for multiple individuals undergoing the same experimental protocol. Inferring the underlying sources is a challenging inverse problem that can only be tackled by biasing the solutions with prior domain knowledge. Several prior hypotheses have been pursued in the literature such as promoting sparse over dense solutions or solving the problem for multiple subjects at once. However, none take advantage of the particular spatial geometry of the problem. The purpose of this thesis is to exploit the multi-subject, spatial and temporal aspects of magneto-encephalography data as much as possible to improve the conditioning of the inverse problem. To that end, our contributions revolve around three axes: optimal transport (OT), sparse multi-task regression and time series. Indeed, the ability of OT to capture spatial disparities between measures makes it very well suited to compare and average neural activation patterns based on their shape and location over the cortical surface of the brain. For the sake of scalability, we take advantage of the entropic formulation of optimal transport, which we argue has two important missing pieces. From a theoretical perspective, it has no closed form analytical expressions, and from a practical perspective, entropy leads to a significant increase in variance known as entropic bias. We complete this puzzle by studying multivariate Gaussians for which we uncover an entropic OT closed form and propose debiased algorithms to compute fast and accurate optimal transport barycenters. Second, we define a multi-task prior based on OT and sparse penalties to jointly solve the inverse problem for multiple subjects to promote spatially coherent solutions. Our real data experiments highlight the benefits of using OT as a prior over classical multi-task regression penalties. Finally, we propose a loss function to compare and average spatio-temporal data that computes temporal alignments across spatially similar observations of the data via a fast GPU friendly algorithm.

Lots of great  features for plotting and and GLM fitting. Please see

http://nilearn.github.io/whats_new.html#v0-7-0 for a summary of new features.

Thx to all the developers !

Maturin Massias, former PhD student of Parietal, is receiving the PGMO PhD Prize for his work  “Sparse high dimensional regression in the presence of colored heteroscedastic noise : application to M/EEG source imaging” and implementation of his ideas in CELER (https://github.com/mathurinm/CELER).

We’re delighted to announce that the following 6 papers have been accepted at NeurIPS:

We are pleased to share the good news that three papers from our team have been accepted for AISTATS 2020 (International Conference on Artificial Intelligence and Statistics):