Vehicular traffic management constitutes a major issue for modern society. The problem of road traffic, and its effects on pollution, time-consumption and their social and economical consequences, require an accurate policy and planning of road networks. The modeling and analysis of traffic phenomena can be performed at different scales (micro, meso and macro),  and the research activity on the subject has grown considerably in the last decades, involving engineers, physicists and mathematicians. The workshop will focus on the mathematical developments which can contribute to advancing the fields of modeling of traffic, calibration and estimation of models, and control of traffic through mathematical models.

This workshop aims at creating and strengthening contacts in the community of researchers interested in Traffic Modeling and Management. Moreover, selected PhD students and postDocs will have the opportunity to present their results.

The topics covered in the various communications comprehend:

The intense conference time table will foster discussions and interactions among participants.

Each participant should arrange his own hotel reservation. We advise you to book your room as soon as possible to benefit of lower rates. Some hotels can be found below (here is a map).   In Sophia Antipolis (at walking distance from INRIA): Hôtel Novotel From 109€ Breakfast: 15€ Hôtel Mercure From 109€ Breakfast: 17,90€ … 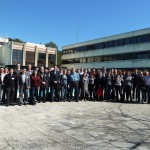 PhD students and young researchers are invited to apply to deliver a communication. Please submit to tram2@inria.fr an abstract of the proposed talk. Limited funding for partial or complete covering of travel and lodging expenses is available upon justified request. Please apply submitting to tram2@inria.fr also a CV and a recommendation letter. The deadline for …

Registration is free but compulsory. To register, please send an e-mail to paola.goatin(at)inria.fr not later than MARCH 5, 2013, with the following informations: Subject: Workshop TRAM2 Last name: First name: Affiliation: Arrival date: Departure date: Will attend the social dinner on Thursday 21 (yes/no): Special diets (if any):

Sophia Antipolis is located in South-East France, 8 km from Antibes, 12 km from Cannes and 28 km from Nice (map can be found here). To reach the workshop location By plane The nearest international airport is Nice-Côte d’Azur (20km). Regular shuttles from the airport (Terminal 1 and 2) to Sophia Antipolis by bus: Line …