In this work, we show the extension of the non-Cartesian SPARKLING (Spreading Projection Algorithm for Rapid K-space sampLING) sampling method to 3D MR imaging. We use both stack-of-SPARKLING and fully 3D SPARKLING trajectories to acquire T2*-weighted ex vivo high-resolution 3D images at 7 Tesla. We show that our method preserves the image quality even at short scan times and compare it to conventional non-Cartesian variable-density 3D sampling.

We then compared the Z-variable density stack of Sparkling to existing 3D subsampling schemes, namely hybrid radial-spiral and Poisson-Disk. 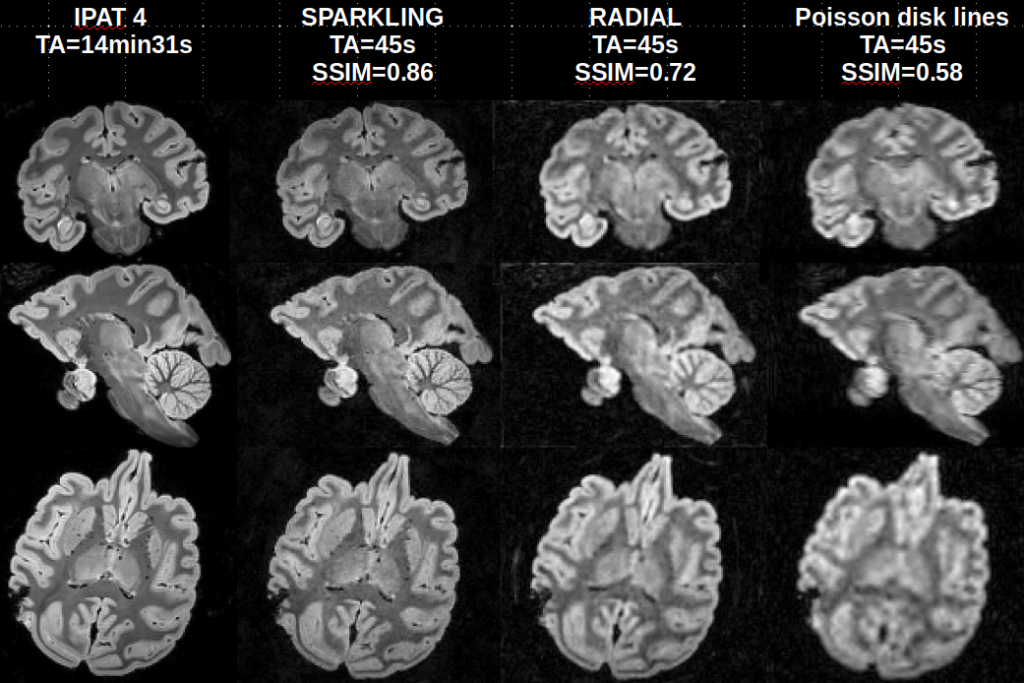 Non-Cartesian trajectories present many benefits compared to classic Cartesian ones: they allow rapid and efficient coverage of the k-space, contain fewer coherent artifacts from under-sampling and can be more robust to motion. In particular, radial readouts showed many successes in dynamic imaging with the GRASP method notably. More recently, spiral trajectories combined with non-Cartesian SENSE also demonstrated the advantages of such methods for high-speed and high-resolution imaging. In this work, we propose to use “SPARKLING” curves (Segmented Projection Algorithm for Random K-space sampLING) as a new type of non-Cartesian trajectories to perform a more efficient sampling in 2D anatomical imaging while using the same number of samples for a limited time budget. These segmented curves were obtained using a projection method on measure sets which offers three main advantages: i) generating segmented Non-Cartesian trajectories along a chosen density; ii) meeting the hardware constraints on the magnetic field gradients (magnitude, slew rate); iii) performing a fast coverage of k-space. Simulations on retrospective Compressed Sensing (CS) proved the superiority of such approach as compared to classical 2D subsampled schemes such as radial or spiral readouts, which encouraged us to implement them. As a first prospective application on a 7T scanner, we acquired the proposed SPARKLING trajectories subsampled by a factor of 20 for a high targeted resolution of 0.4×0.4×3 mm.

Magnetic Resonance Imaging (MRI) is one of the most dynamic and safe imaging modalities used in clinical routine today. Yet, one major limitation to this technique resides in its long acquisition times. Over the last decade, Compressed Sensing (CS) has been increasingly used to address this issue and offers to shorten MR scans by reconstructing images from undersampled Fourier data. Nevertheless, a quantitative guide on the degree of acceleration applicable to a given acquisition scenario is still lacking today, leading in practice to a trial-and-error approach in the selection of the appropriate undersampling factor. In this study, we shortly point out the existing theoretical sampling results in CS and their limitations which motivate the focus of this work: an empirical and quantitative analysis of the maximum degree of undersampling allowed by CS in the specific context of T2*-weighted MRI. We make use of a generic method based on retrospective undersampling to quantitatively deduce the maximum acceleration factor R max which preserves a desired image quality as a function of the image resolution and the available signal-to-noise ratio (SNR). Our results quantify how larger acceleration factors can be applied to higher resolution images as long as a minimum SNR is guaranteed. In practice however, the maximum acceleration factor for a given resolution appears to be constrained by the available SNR inherent to the considered acquisition. Our analysis enables to take this a priori knowledge into account, allowing to derive a sequence-specific maximum acceleration factor adapted to the intrinsic SNR of any MR pipeline. These results obtained on an analytical T2*-weighted phantom image were corroborated by prospective experiments performed on MR data collected with radial trajectories on a 7 Tesla scanner with the same contrast. The proposed framework allows to study other sequence weightings and therefore better optimize sequences when accelerated using CS.

(A): 3D view of the maximum undersampling factors Rmax allowing SSIM scores above 0.9 as a function of image size N and input SNR. (B): Its 2D projection on the (Rmax, N) plane. The N-SNR level line (orange line) of the presented T2*-weighted GRE acquisition was added on both graphs.

Compressed Sensing (CS) has allowed a significant reduction of acquisition times in MRI, especially in the high spatial resolution (e.g., 400 µm) context. Nonlinear CS reconstruction usually relies on analysis (e.g., Total Variation) or synthesis (e.g., wavelet) based priors and L1 regularization to promote sparsity in the transform domain. Here, we compare the performance of several orthogonal wavelet transforms with those of tight frames for MR image reconstruction in the CS setting combined with parallel imaging (multiple receiver coil). We show that overcomplete dictionaries such as the fast curvelet transform provide improved image quality as compared to orthogonal transforms. For doing so, we rely on an analysis-based formulation where the underlying L1 regularized criterion is minimized using a primal dual splitting method (e.g., Condat-Vu algorithm). Validation is performed on ex-vivo baboon brain T2* MRI data collected at 7 Tesla and restrospectively under-sampled using non-Cartesian schemes (radial and Sparkling). We show that multiscale analysis priors based on tight frames instead of orthogonal transforms achieve better image quality (pSNR, SSIM) in particular at low signal-to-noise ratio.

Reducing acquisition time is a crucial challenge for many imaging techniques. Compressed Sensing (CS) theory offers an appealing framework to address this issue since it provides theoretical guarantees on the reconstruction of sparse signals by projection on a low dimensional linear subspace. In this paper, we focus on a setting where the imaging device allows to sense a fixed set of measurements. We first discuss the choice of an optimal sampling subspace (smallest subset) allowing perfect reconstruction of sparse signals. Its standard design relies on the random drawing of independent measurements. We discuss how to select the drawing distribution and show that a mixed strategy involving partial deterministic sampling and independent drawings can help breaking the so-called “coherence barrier”. Unfortunately, independent random sampling is irrelevant for many acquisition devices owing to acquisition constraints. To overcome this limitation, the notion of Variable Density Samplers (VDS) is introduced and defined as a stochastic process with a prescribed limit empirical measure. It encompasses samplers based on independent measurements or continuous curves. The latter are crucial to extend CS results to actual applications. Our main contribution lies in two original continuous VDS. The first one relies on random walks over the acquisition space whereas the second one is heuristically driven and rests on the approximate solution of a Traveling Salesman Problem. Theoretical analysis and retrospective CS simulations in magnetic resonance imaging highlight that the TSP-based solution provides improved reconstructed images in terms of signal-to-noise ratio compared to standard sampling schemes (spiral, radial, 3D iid…).

(a): Target distribution π to be approximated. Continuous random trajectories reaching distribution π based on Markov chains (b) and on a TSP solution (c). The latter is much more accurate.

Performing k-space variable density sampling is a popular way of reducing scanning time in Magnetic Resonance Imaging (MRI). Unfortunately, given a sampling trajectory, it is not clear how to traverse it using gradient waveforms. In this paper, we actually show that existing methods can yield large traversal time if the trajectory contains high curvature areas. Therefore, we consider here a new method for gradient waveform design which is based on the projection of unrealistic initial trajectory onto the set of hardware constraints. Next, we show on realistic simulations that this algorithm allows implementing variable density trajectories resulting from the piecewise linear solution of the Traveling Salesman Problem in a reasonable time. Finally, we demonstrate the application of this approach to 2D MRI reconstruction and 3D angiography in the mouse brain.

Full k-space acquisition with an EPI sequence (a) and corresponding reference image (f). Comparison between an exact parameterization of the TSP trajectory (b) and projection from Traveling Salesman Problem trajectory onto the set of constraints (c),(d). In experiments (b,c), the number of measured locations is fixed to 9\% (r = 11.2), whereas in (b,d), the time to traverse the curve is fixed to 62 ms. (e): Spiral trajectory with acquisition of the k-space center. (g-j): Reconstructed images corresponding to sampling strategies (b-e).

A projection method on measures sets.

We consider the problem of projecting a probability measure π on a set MN of Radon measures. The projection is defined as a solution of a variational problem. To motivate and illustrate our study, we show that this problem arises naturally in various practical image rendering problems such as stippling (representing an image with N dots) or continuous line drawing (representing an image with a continuous line). We provide a necessary and sufficient condition on the sequence of measure that ensures weak convergence of the projections to π. We then provide a numerical algorithm to solve a discretized version of the problem and show several illustrations related to computer-assisted synthesis of artistic paintings/drawings. 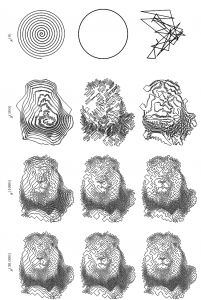 Projection of a lion image onto a set of N = 8, 000 measures. The figure depicts the resulting line with several values
of the iterates of our Algorithm.