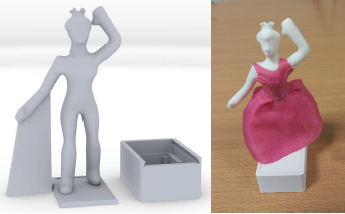 At left, 3D models used to print an enhanced princess figurine. At right, the dressed figurine.

This paper presents Figurines, an offline framework for narrative creation with tangible objects, designed to record storytelling sessions with children, teenagers or adults. This framework uses tangible diegetic objects to record a free narrative from up to two storytellers and construct a fully annotated representation of the story. This representation is composed of the 3D position and orientation of the figurines, the position of decor elements and interpretation of the storytellers’ actions (facial expression, gestures and voice). While maintaining the playful dimension of the storytelling session, the system must tackle the challenge of recovering the free-form motion of the figurines and the storytellers in uncontrolled environments. To do so, we record the storytelling session using a hybrid setup with two RGB-D sensors and figurines augmented with IMU sensors. The first RGB-D sensor completes IMU information in order to identify figurines and tracks them as well as decor elements. It also tracks the storytellers jointly with the second RGB-D sensor. The framework has been used to record preliminary experiments to validate interest of our approach. These experiments evaluate figurine following and combination of motion and storyteller’s voice, gesture and facial expressions. In a make-believe game, this story representation was re-targeted on virtual characters to produce an animated version of the story. The final goal of the Figurines framework is to enhance our understanding of the creative processes at work during immersive storytelling.