Freshkiss3d is a finite volume code, written in Cython, for the simulation of the 3d hydrostatic and incompressible Navier-Stokes equations with free surface. The strong point of Freshkiss3d is to be able to solve numerically the 3d Navier-Stokes equations with free surface also in the context of variable density flows (Navier-Stokes-Fourier system). The joint owners of Freshkiss3d are CEREMA (25%), Inria (50%), Sorbonne university (25%). New research results and new developments (models and numerical techniques) are integrated in Freshkiss3d when validated. Freshkiss3d is used by other Inria team (BIOCORE, industrial partners (Sciworks Technology,. . . ), geophysicists (IPGP, ISTEP-Sorbonne Univ.). Freshkiss3d is the cornerstone of the industrial contracts of the team, it is also used for teaching. 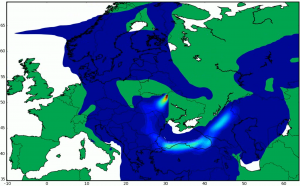 Polyphemus is a modeling system for air quality. As such, it is designed to yield up-to-date simulations in a reliable framework, including data assimilation and ensemble forecasting. Its completeness makes it suitable for use in many applications: photochemistry, aerosols, radionuclides, etc. It is able to handle simulations from local to continental scales, with several physical models. Polyphemus is mainly written in C++, with extensions in Python. It has been developed with École des Ponts ParisTech. Inria contributions especially lie in the software design, the data assimilation and the ensemble forecasting. Polyphemus is used by research and operational organizations. For example, it was used during the Fukushima disaster by the Atmospheric Transfers Modeling Section of the French Institute for Radiation Protection and Nuclear Safety.

Tsunamaths is an educational platform aiming at simulating historical tsunamis. Real data and mathematical explanations are provided to enable people to better understand the overall process of tsunamis. TsunaMaths was presented at the exhibition on the occasion of “Mathematics of Planet Earth” (December 2012-December 2013) at the Deutsches Tecknikmuseum (Berlin). It was also a part of the Nims-Imaginary exhibition at Seoul (Aug. 13-20, 2014) on the occasion of ICM2014.

Generic C++ library for data assimilation | Web site http://verdandi.sourceforge.net/
Verdandi is a free and open-source (LGPL) library for data assimilation. It includes various such methods for coupling one or several numerical models and observational data. Mainly targeted at large systems arising from the discretization of partial differential equations, the library is devised as generic, which allows for applications in a wide range of problems (biology and medicine, environment, image processing, etc.). Verdandi also includes tools to ease the application of data assimilation, in particular in the management of observations or for a priori uncertainty quantification. Implemented in C++, the library may be used with models implemented in Fortran, C, C++ or Python. Verdandi has been developed with the Inria project-team M3DISIM. It is used by research and operational organizations. For example, it is used by the SME NUMTECH for the assimilation of air pollution data at urban scale in several cities.

Permanent link to this article: https://team.inria.fr/ange/logiciel/

Almost all the simulations were performed with Freshkiss3d, see also the Freshkiss3d Gallery. Applications Academic tests