A 3D incompressible Navier-Stokes solver is being developed in the frame of a PhD Thesis in partnership with VALOREM. This code is natively parallel and and octree discretisations are considered in order to locally refine the mesh in the regions characterised by the most interesting turbulent structures. 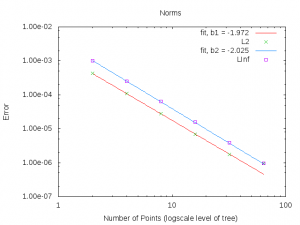 Figure : Logscale norms of error as a function of number of points in grid