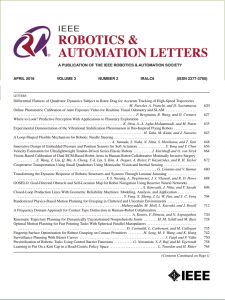 A paper accepted in IEEE Robotics and Automation Letters

To date most of visual servoing approaches have relied on the geometric features that have to be tracked and matched in the image. Recent works have highlighted the importance of taking into account the photometric information of the entire images. This leads to direct visual servoing (DVS) approaches. The main disadvantage of DVS is its small convergence domain compared to conventional techniques, which is due to the high non-linearities of the cost function to be minimized. In this paper we propose to project the image on an orthogonal basis (PCA) and then servo on either images reconstructed from this new compact set of coordinates or directly on  these coordinates used as visual features. In both cases we exhibit the analytical formulation of the interaction matrix. We show that these approaches feature a better behavior that the classical photometric visual servoing scheme allowing larger displacements and a satisfactory decrease of the error norm thanks to a well modelled interaction matrix.