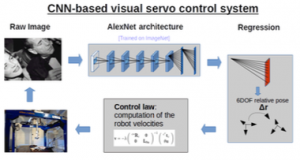 We proposed  a deep neural network-based method to perform high-precision, robust and real-time 6 DOF positioning tasks by visual servoing. We show that a convolutional neural network can be fine-tuned to estimate the relative pose between the current and desired images and a pose-based visual servoing control law is considered to reach the desired pose. We also considered how  to efficiently and automatically create a dataset used to train the network. We also show that the proposed the training of a scene-agnostic network by feeding in both the desired and current images into a deep network.