A Geometric Approach to Sound Source Localization from Time-Delay Estimates 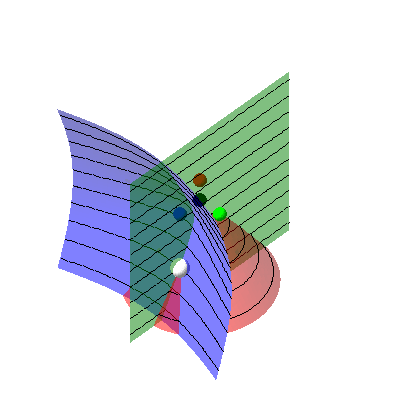 Abstract: We address the problem of sound-source localization from time-delay estimates using arbitrarily-shaped non-coplanar microphone arrays. A novel geometric formulation is proposed, together with a thorough algebraic analysis and a global optimization solver. The proposed model is thoroughly described and evaluated. The geometric analysis, stemming from the direct acoustic propagation model, leads to necessary and sufficient conditions for a set of time delays to correspond to a unique position in the source space. Such sets of time delays are referred to as {\em feasible sets}. We formally prove that every feasible set corresponds to exactly one position in the source space, whose value can be recovered using a closed-form localization mapping. Therefore we seek for the optimal feasible set of time delays given, as input, the received microphone signals. This time delay estimation problem is naturally cast into a programming task, constrained by the feasibility conditions derived from the geometric analysis. A global branch-and-bound optimization technique is proposed to solve the problem at hand, hence estimating the best set of feasible time delays and, subsequently, localizing the sound source. Extensive experiments with both simulated and real data are reported; we compare our methodology to four state-of-the-art techniques. This comparison shows that the proposed method combined with the branch-and-bound algorithm outperforms existing methods. These in-depth geometric understanding, practical algorithms, and encouraging results, open several opportunities for future work.

In the case of real data the sound acquisition was performed with four Soundman OKM II Classic Solo microphones linked to a computer via a Behringer ADA8000 Ultragain Pro-8 digital external sound card. The tetrahedron-like structure was mounted onto a robotic system with two rotational degrees of freedom: a pan motion and a tilt motion. This device was specifically designed to achieve precise and reproducible movements. The emitter – a loudspeaker – was placed at approximately 1.7 meters. These recordings can be download here. In the case of simulated data, we used the timit data set and filters genrated with the ISM model of [2]. These flters can also be downloaded here.