The AVDIAR dataset is only available for non-commercial use

AVDIAR (Audio-Visual Diarization) is a dataset dedicated to the audio-visual analysis of conversational scenes. Publicly available datasets in this field are limited to structured social settings such as round-table meetings and smart-room recordings, where audio-visual cues associated with seated participants can be reliably acquired through the use of a camera network and of a microphone array. The motivation behind the AVDIAR dataset is to enable audio-visual scene analysis of unstructured informal meetings and gatherings. We collected scenarios covering examples of interactions between a group of people engaged in a informal conversations. The scenarios involve participants that are either static and speak or move and speak, in front of a camera-microphone setup placed on a dummy head. In an attempt to record natural human-human interactions, all scenarios were unscripted and participants were allowed to enter, wander around, leave the scene at any time and interrupt each other while speaking. The recordings were performed in a standard reverberant environment.

We recorded 23 sequences over a period of 15 days and with sequence duration ranging from ten seconds to three minutes (~27 minutes in total). We carefully annotated each frame with bounding boxes of faces and of upper-body positions, as well as their identity and speaking activity over the entire sequence duration. The acquisition setup, sequence annotation protocol and content are detailed in [comming soon]. For further information please contact us.

If you use this dataset or any part of it, please cite the following journal paper:

The recording setup consists of an acoustic dummy head, six microphones and two color cameras. A tripod is used to rigidly mount the acoustic dummy head and the two cameras. The six microphones are placed on the dummy head, two of them are plugged into the left and right ears, and the other four are on each side of the head. The tripod height is adjusted at eye height of an average person, 1.5 m. This setup is shown on the figure above.

The microphones plugged into the ears are from Sennheiser Triaxial MKE 2002, and the other four are Soundman OKM II Classic Solo microphones. They are all linked to a desktop computer via a Behringer ADA8000 Ultragain Pro-8 digital external sound card with signal sampling rate of 48kHz.

Each color camera is a PointGrey Grasshopper3 unit equipped with a Sony Pregius IMX174 CMOS sensor of size 1.2′′ × 1′′ and a Kowa 6 mm wide-angle lens with a horizontal × vertical field of view of 97◦ × 80◦. The cameras deliver images with a resolution of 1920 × 1200 color pixels at 25 FPS. The cameras were mounted parallel to each other and of 20 cm apart, hence the cameras deliver stereoscopic images that are almost representative of a human-eye view of the scene. The cameras are connected to a single PC and are finely synchronized by an external trigger controlled by software. The audio-visual synchronization was done by using time-stamps delivered by the computer’s internal clock.

With this setup, we recorded 23 different sequences. Twelve different participants were recorded and up to five people are present in each sequence. Each recorded scenario involves speaking participants that are either static or move in front of the camera-microphone unit at a distance varying between 1.0 m and 3.5 m. For the sake of varying the acoustic conditions, we used three different rooms. For each room, both stereo calibration and audio-visual calibration were performed. These calibration files are provided.

We provide visual, audio and audio-visual annotations. They are described as follows:

The table below lists the recorded scenarios forming the AVDIAR dataset. In order to easy identify the sequence and its content a systematic name coding is used. The name of each sequence is unique and contains a compact description of its content. For example ”SeqNN-xP-SyMz” has four parts: 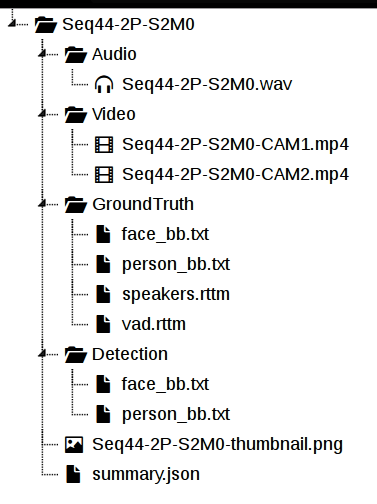 Each sequence is provided in a separate zip file (or folder) and contains:

As an example, the file structure for the sequence Seq44-2P-S2M0 is shown on the figure on the right.

Some of Our Related Works