One of the main difficulties for the simulation of a phenomenon modelled by a Partial Differential Equation (PDE) is the geometrical modelling of the computational domain with a single mesh block. We focus our investigation over Overset grids or Chimera meshes. This kind of geometrical discretisation consists of multiple overlapping mesh blocks (possibly of different topologies) that together discretise the evolving domain of the PDE. 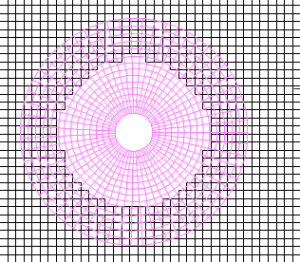 Example of Chimera mesh. In black there is a Cartesian background mesh, in pink a polar foreground mesh.

Usually, one has a background mesh that includes one or more foreground mesh patches that are fitted to the physical domain boundaries. This mesh generation approach considerably simplifies the task of mesh adaptation in the case of boundary layers, changing geometries for un unsteady problem (for example, fluid-structure interaction problems in fluid-dynamics) and for unsteady multiply connected domains. Once the multiple mesh patches are generated, they are collated in order to obtain an appropriate overlapping zone between the neighbouring blocks. In the overlap zones, the exchange of solution information from one grid to another is performed. A compact transmission condition is generally sought in order to limit communications between the grids. Namely, a compact transmission stencil only composed of the first layer of cells is defined around any cell.

In our group, we study space-time combined Finite Element (FEM) – Finite Volume (FVM) schemes adapted for this kind of grids. Our objective is to combine some aspects of an Arbitrary Lagrangian-Eulerian (ALE) approach, notably its flexibility with respect to grid displacement and deformation, to the multi-block discretisation strategy of overset grids. In particular, we devote special care to grid overlapping zones in order to devise a compact and accurate discretisation stencil to exchange information between different mesh patches, in the spirit of previous works on cartesian hierarchical grids. We apply this approach to integrate linear and nonlinear Advection-Diffusion PDEs as well as Poisson equations.

The numerical solution on Chimera grids is obtained by exchanging data through the fringe cells at the overlapping zone. We derive a second order compact condition by properly defining a set of cells, i.e. the stencil, that belong both to the back- and foreground meshes, over which the solution is interpolated in space and time by an appropriate polynomial. This hybrid stencil allows a smooth discretisation transition from one block to another. In particular, first a free-mesh discontinuous FEM-solution is recovered and then a FVM-correction is performed in any cell by using information provided by near cells. Thus, for fringe cells, the solution is obtained by combining values from different grids.