In multiphysics  flows (multiphase flows, fluid-solid interactions), it is essential to accurately track and represent the evolution of interfaces. Moreover, the accurate computation of geometric properties of the interface is often required:  for example, the computation of the normal to the interface for methods with second-order penalty terms in fluid-solid interactions [1] or for computations on numerical domains that do not fit the physical domain [4] For the cases of multiphysics flows where the surface tension plays an important role, accurate computation of the curvature is a key stone.

In an Eulerian framework, an efficient way of capturing interfaces is the level set method, introduced by Osher and Sethian.  It consists of the implicit capture of an interface through the zero-isocontour of a higher dimensional function. This eases the treatment of topological changes and can easily be carried on in parallel codes, using domain decomposition for example. 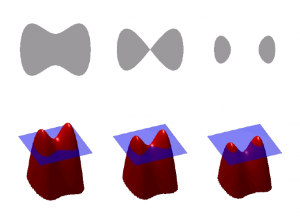 Example of a level-set function and the interface associated

Moreover, geometric properties as the normal to the interface and the curvature can be expressed with first or second-order derivatives of this level-set function:

Distortions of the level set function might lead to significant errors in computing the geometric properties, and one  possible  way  to  avoid  these  errors  is  to  use  the  distance  function  as  a level set function.  However, even with a distance function as an initial state, the level-set can derive far  from  the  distance  function.   To  circumvent  the  problem, Sussman et  al. introduced  a reinitialization algorithm, i.e. an algorithm capable of recomputing the distance function. Several methods have been developed over the years to perform the reinitialization step. They are based on the resolution of the eikonal equation:

We  have investigated  in [2] a  level  set  technique  that  ensures  a  good representation  of  the  interface,  as  well  as  its  geometrical  properties,  even  for  long  times.   The method is developed in a finite differences framework on cartesian grids, in such a way that parallelization should be easily and efficiently available.  It is based on a coupling between an upwind iterative algorithm near the interface [3] , and a second-order fast-sweeping algorithm elsewhere. The strategy is based on a limited number of reinitialization steps:

Flow past a cylinder: level-set without redistanciation

Flow past a cylinder: level-set with new redistanciation

Evolution of the interface under mean curvature flow: without redistanciantion (top) and with new redistanciation (bottom)