Reduced Order Models (ROMs) represent a powerful tool to capture the most important features of a flow field by using a small number of degrees of freedom. Recently, the interest in the use of ROMs for design and optimisation purposes has increased in several different fields of engineering.

These applications introduce important challenges related to the training of the model and the estimation of the error in the predicted field. In particular, different ROM procedures share the need for a training stage in which several expensive high-fidelity simulations (obtained for example by a CFD solver) are performed in order to get a set of snapshots and to build a reference database.
When a ROM is used to predict a field which corresponds to a set of parameters not included in the database particular care must be taken. Indeed, the non linear nature of the fluid dynamics equations and the high sensitivity of the flow field to some design parameters (geometry of the body, Reynolds and Mach number,…) make the direct use of ROMs particularly difficult for general purpose and industrial applications.

In order to avoid these shortcomings, an hybrid zonal approach can be efficiently used to deal with complex flows.  The method requires to compute a database of high-fidelity solutions from which the main features of the flow field are extracted by means of the Proper Orthogonal Decomposition (POD) algorithm. This offline analysis allows to build a POD basis which is able to accurately describe the database by using a small number of modes.
However, the obtained POD basis could lead to poor predictions if used to study configuration not included in the original database. This is particular evident in problems where strongly non linear phenomena (for example the advection of fluid structures) dominate the flow field.

In order to couple the high and low-fidelity solutions it is necessary to introduce an overlapping region in which both solutions are defined. This region is the key to perform a two-way coupling between the two representations. On one hand, the POD expansion in the low fidelity region is used to define the boundary conditions for the high-fidelity solver. On the other hand, the coefficients of the POD expansion are computed by projecting the high-fidelity solution on the POD basis in the overlapping region. 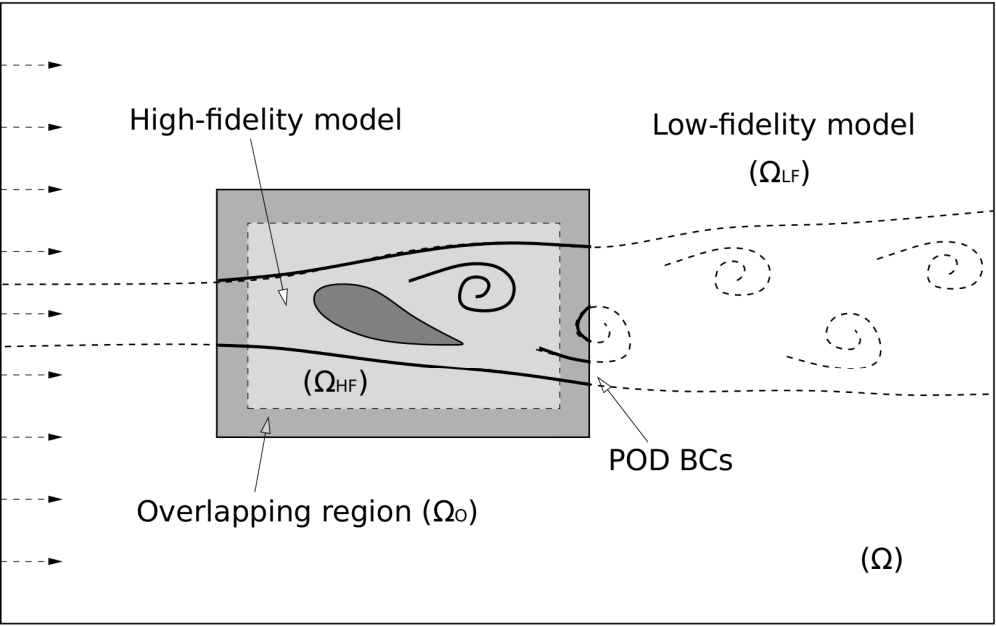 The main issue in the implementation of the zonal approach is related to the definition of a criteria for the splitting of the domain. A possible approach is to use a leave-one-out strategy. The idea is very simple and can be summarised by the following algorithm:

The same procedure can be repeated by removing in turn all the snapshots from the database. Finally, the maximum between all the error distributions can be computed: the obtained field shows clearly what are the regions where the POD basis is not able to perform accurate predictions and where the high-fidelity solver should be used.

The reduction in the computational time obtained by the zonal approach is strongly problem dependent. Usually, there is a tradeoff between the cost of the training phase and the cost of the predictive zonal simulations: the more the database is rich, the smaller is the region in which the high-fidelity solver is required.

In conclusion, the zonal approach seems to be particularly suitable for shape optimisation problems: when a component of a larger system is deformed it is possible  to predict new configurations by using the high-solver only in the neighbourhood of the modified component while the external region can be described by the POD basis.

In the following, an example of the application of the zonal approach to a gust interaction problem is reported. The chosen configuration shows a vortex which interacts with a NACA0012 airfoil (see Fig. 2): several configurations with different values of vortex intensity and radius are simulated in order to build a database. The prediction error map obtained by means of the leave-one-out algorithm is reported in Fig.3. In Fig.4 the time evolution of the lift coefficient (Cl) for a configuration out of the database is reported: the results obtained by means of the zonal POD are compared with a reference high-fidelity simulations. The zonal POD simulations is repeated for different choices of the overlapping region showing how the coupling can influence the prediction error. In order to choose the overlapping region which minimises the prediction error on a given goal function, it is possible to adopt again the leave-one-out strategy during the offline analysis:

Fig.2: Interaction between a vortex and an airfoil 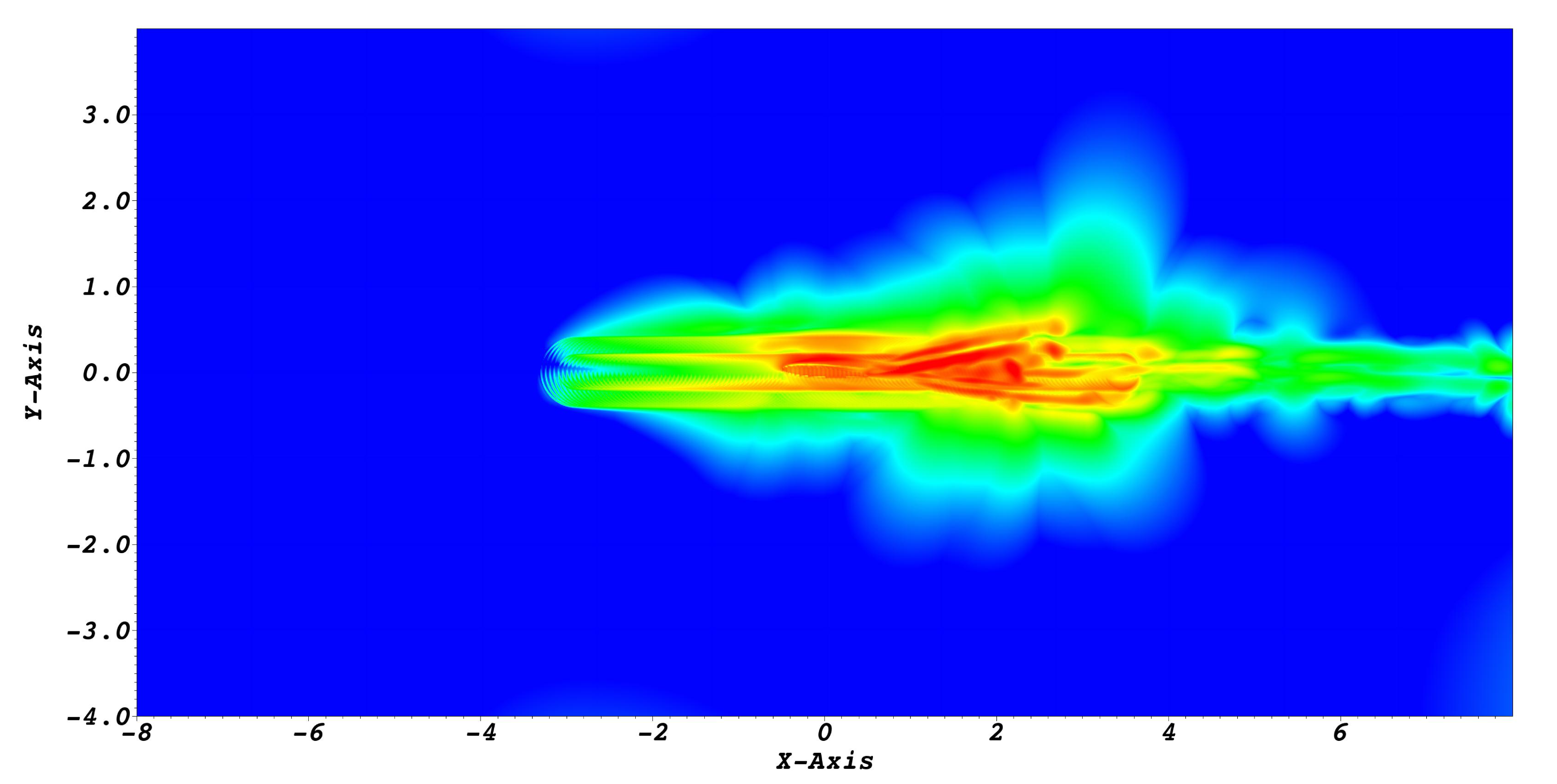 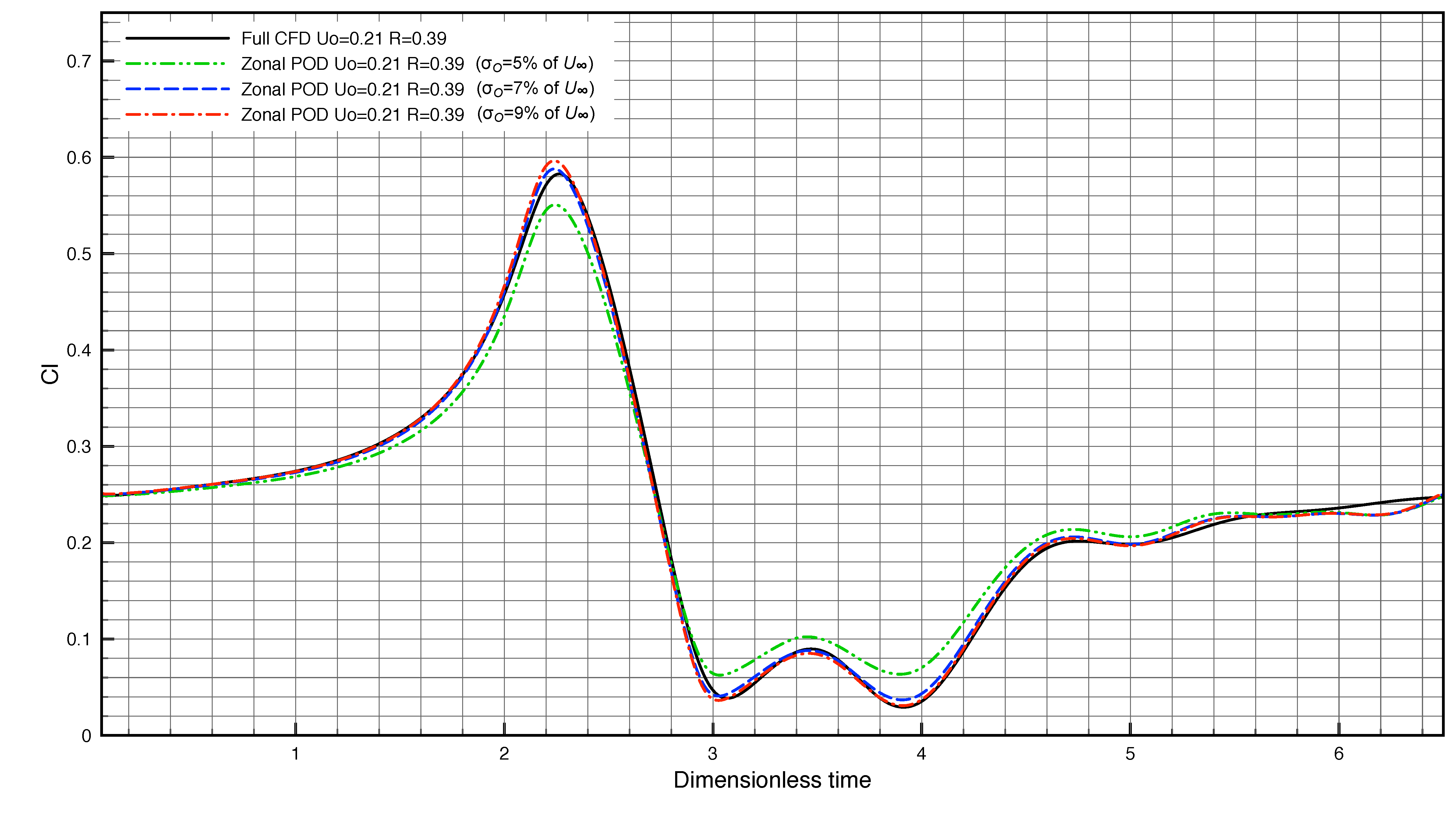 Fig.4: Prediction of the lift coefficient