We are looking for highly motivated PhD candidates in cyber-physical system design.

Scientific context: Hybrid system modeling [1,2,3] is extensively used to design computer-controlled physical systems. A hybrid system consists of differential equations coupled to a discrete control program, capturing the nonsmooth behavior of the physics and the behavior of the software and computing architecture. Hybrid system modeling languages and tools such as Simulink or Modelica are now instrumental in all systems industries (aeronautics, automotive, railway, energy…). The design of the system is a concurrent activity involving several stakeholders (engineers, teams or companies) [4]. They proceed by separating concerns, using specific and specialized formalisms and models of computation ranging from continuous to discrete [5]. They start from a set of high-level functional and non-functional requirements and aim at producing heterogeneous but executable models [6], resulting from the composition of several dedicated (domain-specific) models relative to the various concerns on the system.

Until now, all concerns are usually captured in a uniform modeling and simulation environment with a fixed semantics of the relationships between the various models. In this area, Simulink is a de facto standard design framework, and Modelica a new player. However, more and more domain-specific modeling languages recently appeared for levering on specific experience of particular domains such as embedded and real-time systems [9]. To support this need, Model Driven Engineering provides all the required facilities to design and implement new DSMLs to define the various concerns, usually discrete, of a system [10]. However, these new DSMLs suffer from being disconnected from physics modeling and simulation environments.

Work: In this PhD thesis, we propose to explore the relationship between discrete and continuous in the context of systems engineering in the field of embedded systems. The main objective is to explore the notion of behavioral interfaces (e.g., contracts) for safe composition between continuous models and discrete domain-specific models [7, 8].

In practice, the discrete part would be describe thanks to a domain specific modeling language implemented using model driven engineering (and in particular Eclipse EMF and the GEMOC Studio [13,14]). We expect a language workbench where we can easily define a domain specific modeling language(s), and use it to model discrete concerns connected to continuous phenomenon of a hybrid system. The workbench would offer advanced mechanisms to infer efficient behavioral interfaces from the operational semantics, as well as the required information from the abstract syntax for communicating with continuous phenomenon.

The continuous and nonsmooth behavior of the physics would be described in a hybrid system modeler (e.g., Zélus [12], a hybrid modeling language where the continuous dynamics is expressed using ordinary differential equations, and mode switching and discrete state jumps are expressed using the dataflow synchronous model of computation). The combination of the software and the physics would be obtained by co-simulation or by translation of both parts to the hybrid system modeler.

Working Environment: The candidate will work at INRIA in the DIVERSE and Hycomes teams (workplace: Université Rennes 1, Campus de Beaulieu, 35000 Rennes, France), the contract is for 36 months, and the monthly net salary is 1600 euros.

How to apply: Please send your application (PDF) as soon as possible. Screening of applications starts immediately and continues until the position is filled. Send cover letter including names of at least two referees, CV, PDFs of Master thesis (or draft), and possibly up to three most relevant publications to Benoit Combemale and Benoit Caillaud. 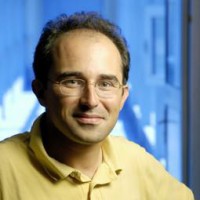