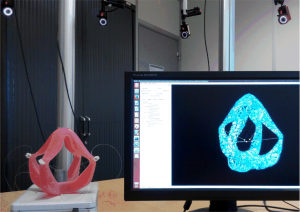 In this paper, we propose a strategy for the control of soft robots with visual tracking and simulation-based predictor. A kinematic model of soft robots is obtained thanks to the Finite Element Method (FEM) computed in real-time. The FEM allows to obtain a prediction of the Jacobian matrix of the robot. This allows a first control of the robot, in the actuator space. Then, a second control strategy based on the feedback of infrared cameras is developed to obtain a correction of the effector position. The robust stability of this closed-loop system is obtained based on Lyapunov stability theory. Otherwise, to deal with the problem of image features (the marker points placed on the end effector of soft robot) loss, a switched control strategy is proposed to combine both the open-loop controller and the closed-loop controller. Finally, experiments on a parallel soft robot driven by four cables are conducted and show the effectiveness of these methods for the real-time control of soft robots.