Models in cardiac electrophysiology are coupled systems of reaction-diffusion PDEs and ODEs. The ODE system displays a very stiff behavior. It is nonlinear and its upgrade at each time step has a high computational cost. We developped high-order explicit and stable integration methods. In an article published in 2018 [17] we investigated the use of exponential Adams Bashforth (EAB) integrators in cardiac electrophysiology. The paper demonstrates stability under perturbation (or 0-stability) and provides a new approach for the convergence analysis of the method. The Dahlquist stability properties of the method were also tested in a new framework that incorporates 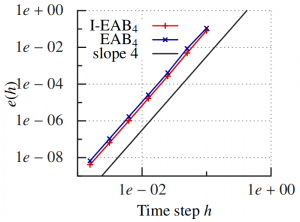 the discrepancy between the stabilizer and the system Jacobian matrix. Provided this discrepancy is small enough, the method was shown to be ⍺-stable. This result is interesting for an explicit time-stepping method. Numerical experiments were performed for two classes of stiff models in cardiac electrophysiology. The EAB method was observed to be as stable as implicit solvers and cheaper at the same level of accuracy.